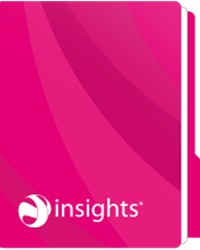 What is the Change Curve?

The Change Curve is a popular and powerful model used to understand the stages of personal transition and organizational change. It helps you predict how people will react to change, so that you can help them make their own personal transitions, and make sure that they have the help and support they need.

Personality underpins how people will respond to change. So, understanding the differences in personalities allows leaders, managers and coaches to predict how different personality types are likely to respond to a situation or change, and then to deploy the correct leadership or coaching style in order to smooth the transition from resistance to acceptance. This approach works equally well for individuals, teams, and organizations.

You have invested vast amounts of time and money in the latest systems and processes; you have trained everyone and you have made their lives so much easier (or so you think). Yet months later, people still persist in their old ways. Where are the business improvements you expected? And when will the disruption you're experiencing subside?

Personality and response to change

The Change Curve model describes the six stages most people go through as they adjust to change. 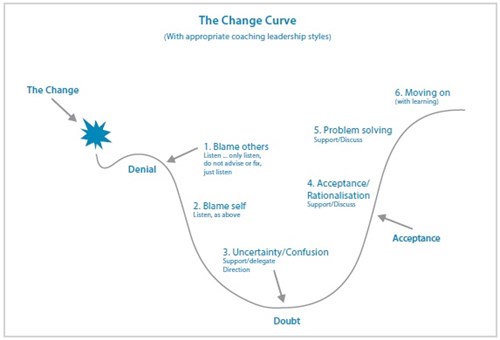 Stage 1 begins when a change is first introduced, where people's initial reaction may be shock or denial. This manifests by blaming others as they react to the challenge of the status quo.

People then move to Stage 2 of the Change Curve: they become critical of themselves.

For as long as people resist the change and remain at Stages 1 and 2 of the Change Curve, the change will be unsuccessful, at least for the people who react in this way. This is a stressful and unpleasant stage. It should also be noted that people can waver between these two stages for quite some time.

Stage 3 is where confusion and doubt set it, but it’s a good sign as people are beginning to move on. This manifests in various ways but people will shows signs of doubt and confusion.

Signs of acceptance will, however shine through, as they may ask questions such as:

At Stage 4 of the Change Curve - Acceptance Rationalization - people stop focusing on what they have lost. They start to let go, and accept the changes. They begin testing and exploring what the changes mean, and so learn the reality of what's good and not so good, and how they must adapt. It is useful to be cautious at this stage of people sliding backwards into doubt. This can be common.

By Stage 5, Solutions and Problem Solving, people not only accept the changes but also start to embrace them. They begin to rebuild their ways of working. Only when people get to this stage can the organization really start to reap the benefits of change. It is here that new job descriptions, ideas and innovation now blossom.

We then reach Stage 6. The change is now starting to become “normal” or the beginnings of routine and status quo. Learnings can now be captured through a review process and feed into the next cycle of change. Individuals have a greater awareness of how to respond to change and begin to build the personal development aspects of this. This stage is the one you have been waiting for! This is where the changes start to become second nature, and people embrace the improvements to the way they work.

As someone managing the change, you'll finally start to see the benefits you worked so hard for. Your team or organization starts to become productive and efficient, and the positive effects of change become apparent. While you are busy counting the benefits, don't forget to celebrate the success! The journey may have been rocky, and it will have certainly been at least a little uncomfortable for some people involved. Everyone deserves to share the success. What's more, by celebrating the achievement, you establish a track record of success, which will make things easier the next time change is needed.

How to move your people through the Change Curve

The Change Curve shows a positive move towards change where acceptance is the ultimate outcome. However, unless your organization and leaders actively help move your people through the various stages of the curve, then individuals may become stuck at any stage, thereby making change more difficult (if not impossible). So how do you help guide them through change in a positive and effective way?

Everyone has different preferences when it comes to how they like to be communicated with, and how they process information, therefore having an understanding of the different personality types within your team and the human side of change can have a massive impact on how you can support them through the change process.

If you find that an individual is stuck in one of the first three stages of the curve, consider if they:

Have been given all the information they would need in order to accept the change and see it as necessary and positive for themselves, their team or the organization. They may also want to know that the inherent risks of change have been considered and that it is worth changing the status quo which they may feel more comfortable with.

Have had adequate time to accept the change. They may need more time but will move through to acceptance at a steady pace.

If you find that an individual gets through all the stages quickly, but then reverts back to confusion, consider if they:

Like change and are future-oriented, but are so excited by the idea that they’ve skipped the attention to detail and understanding that change involves. This might mean you support them in getting through the stages quickly at first, but know that once the confusion sets back in, you may need to follow up again with information and coaching that has already been offered in order for the change to take hold long-term.

If you find that an individual is stuck specifically at Stage 2 (Blaming Others) and is doing so very vocally, consider if they:

Were the ones to instigate the change. If they weren’t, then they may feel that change is being imposed upon them as a done deal without consultation. If they weren’t involved in the change planning, then ask them to provide feedback in order to gain their buy-in and support. You may find yourself with some great new ideas!

Coaching individuals through the Change Curve

Change Curve Stages 1 and 2 - Blaming Self and Others

This is easy to spot. The style to use here is to simply listen… don’t be tempted to jump in and fix it, don’t offer solutions, and don’t agree with them, just listen. Watch as they move to Stage 2, where again, you just listen. This can take some time, but you need to let them vent. Patience is often the key here!

Again this is easy to spot. You'll probably hear sentiments like: “What am I supposed to do with my work?”, “Perhaps I should look elsewhere,” or “I am not sure of any of this.” The style here is to start giving pointers, start directing them and give some context around the way things will look. It is now your role to “sell” the benefits of the change processes, people, future, and business value. This is appropriate for all of the different color energies, although be aware that dominant Earth Green and Cool Blue energies can “roll” back a step.

Here things begin to get easier.  This is a good time to get your team to start brainstorming ideas, solutions, and let them know you are supporting them. Watch for individuals who may slip into confusion as they realize they aren’t fully sure of what's just happened.

As above, here they take ownership for the change. They stop focusing on what they have lost, and start to let go and accept the changes. They begin testing and exploring what the changes mean, and so learn how they must adapt. This is where you stabilize the change.

Here the golden question to ask is, “what have you learnt about yourself and the process you have gone through?” At this stage, they not only accept the changes but also start to embrace them and begin to rebuild their ways of working. You should now see some benefits coming through from the change.

Leading or managing change with teams and organizations

When leading change, the same techniques apply to teams and organizations:

Stage 1, 2 and 3:  Listen to your people one on one, let them vent, don't react, keep calm. Don’t give them a platform to get into a “group think” (i.e. consider whether or not to launch the change at a meeting). Instead, write to everyone explaining what's going to happen and the business rationale behind the change and the benefits of the change. Invite people to come and see you or their line manager. Show them the details.

Stage 4 and 5: Arrange change workshops to work out or show the processes involved and the exact detail of roles. Brainstorm ideas to get engagement.

Stage 6: Stabilize and capture learning. Start to look for the benefits of the change which feed back into the team or organization.

This image shows an actual team going through change. You'll notice that although the team leaders have already reached the end stages of the change curve, their team members are scattered throughout various previous stages. This is an important reminder for leaders that although they may be already moving on, they must circle back with their team members to help them in their individual transitions through change. 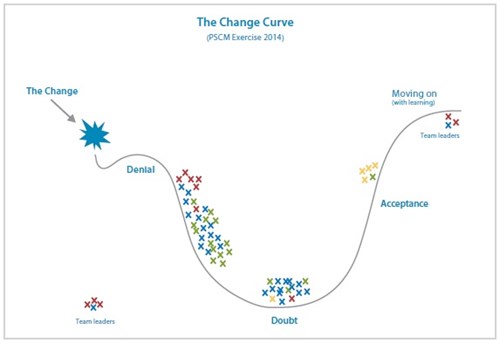 As someone needing to make changes within your organization, the challenge is not only to get the systems, process and structures right, but also to help and support people through these individual transitions, which can sometimes be intensely traumatic, and involve loss of power and prestige. The easier you can make this journey for people, the sooner your organization will benefit, and the more likely you are to be successful. 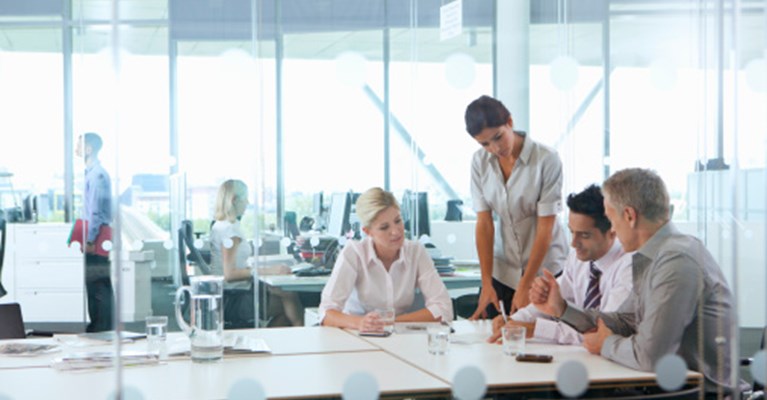 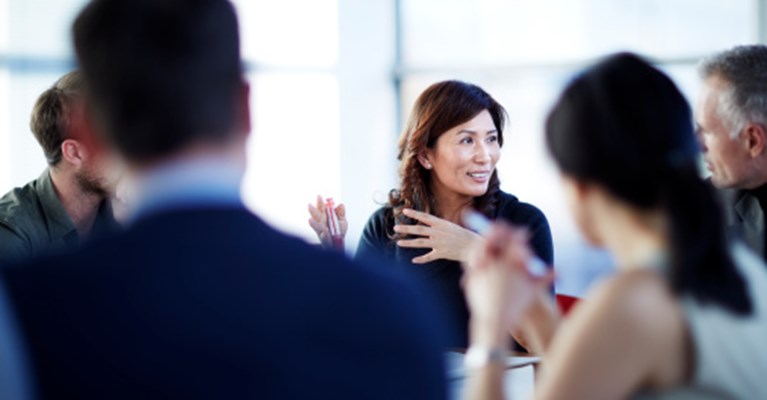 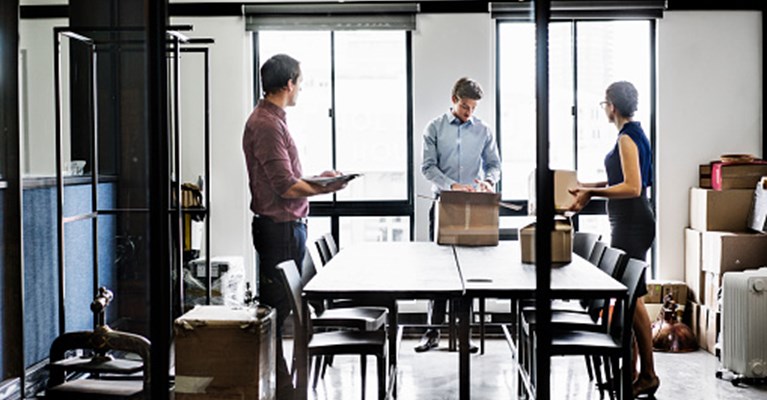